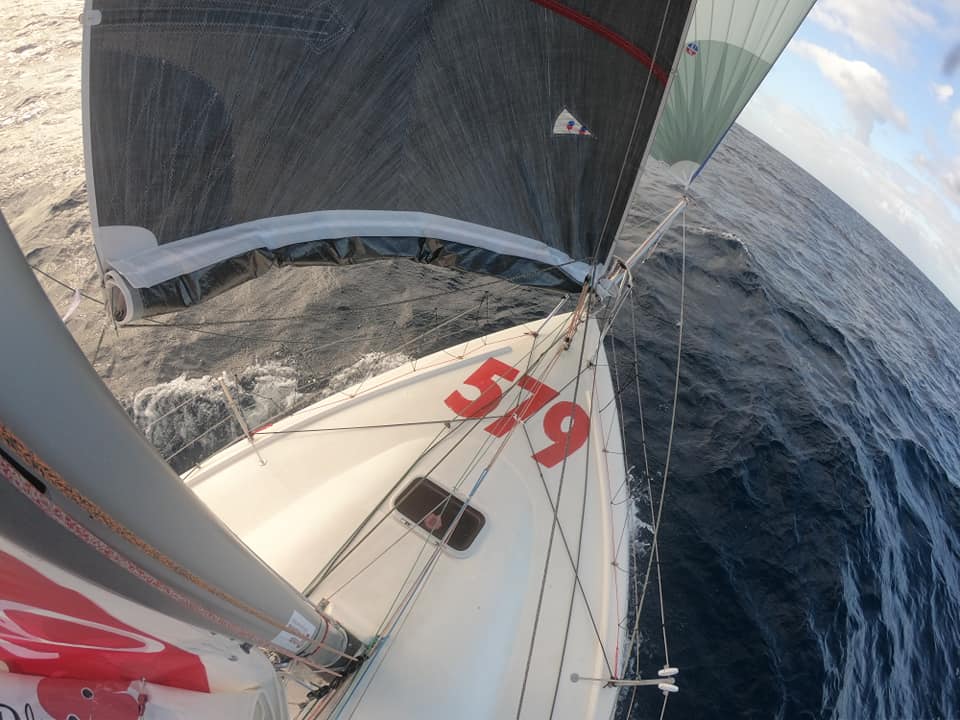 A reliable source of energy is extremely important for any yacht and especially for ocean solo sailors. Energy must be constantly accumulated and stored. Average consumption on the Mini is 3.5 - 5 A, depending on installed equipment and weather conditions in which the autopilot works.

According to the Class Mini rules each boat must have few batteries with a total capacity of at least 200 Ah.
Lithium batteries have a high specific energy density, which allows them to store more energy in batteries of smaller size and mass. They are also distinguished by high current output and have a number of advantages. But even their charge lasts for a very limited time.

During long ocean races, the batteries need to be charged almost constantly. In this case, it is desirable to have at least two independent sources. In general, all methods of autonomous charging can be divided into two groups:

Normally on Mini, solar panels are used as the primary source of energy, and any type of generator - as secondary.

ENERGY GENERATION ON THE SEA

1. SOLAR PANELS
With solar panels, everything is clear - they charge the battery thanks to solar energy, they weigh relatively little, and can be flexible. But there are also many risks, especially for a small yacht. Primarily the risk of damage to the panel itself, controller, cable or contacts. The second is the lack of sun. It may happen that for several days the sun does not shine, or you go in such courses that you cannot effectively direct the panels to the sun – they stay in the shade of the sails.

On the Mini, due to the small size of the deck, they are installed either on special brackets behind the stern, or they are moved around the deck on their own and are constantly installed or removed so as not to damage during manoeuvres. On bigger boats they are very often simply mounted on top of the cabin deck or in places that are more or less protected.

2. HYDROGENERATOR
A hydrogenerator is relatively inexpensive, but it requires a flow rate to give charge. At low speed of the boat it will not charge, but it will give resistance. Therefore, it can be used from about 6 knots of speed. For Transat it can work pretty good - the average boat speed will be about 9-10 knots.
There is also a risk of damage - collision with floating objects and breakdown of the propeller. Plus the risk of damaging of cables, charger and contacts.

3. WIND ENERGY
Wind generators are not used at all on Mini boats. The fact is that Minis are designed mainly for downwind, and these are planing boats. That is, very often they go at speeds close to the speed of the wind blowing from the stern. And the work of the wind generator will be simply ineffective. And because of the huge sails and long booms it is easy to mechanically damage such a generator.

For a long time it seemed to me that the wind generators was the lot of slow cruisers, but I was surprised to find them on the Imoca 60 before the Vendee Globe kicked off. Then I realized that foiling boats often get a "ice boat effect" – they go at speeds higher than the wind speed, thereby changing the angle of the apparent wind and the wind generator may well work. In addition, the Imoca is much larger and less likely to damage the generator. And there are more energy sources on Imoca boats.

4. GASOLINE GENERATOR
In the 2020 season, I raced with this. Of the advantages, it is cheap and if you take a powerful charger, it charges quickly enough (I had a charge current of 24 A). This is where the pros are over. This energy source is the least environmentally friendly of all. It runs on fossil fuels, has a very unpleasant exhaust, from which the head constantly hurts. It does not work while boat is heeling or bumping. So in the race it is constantly necessary to catch conditions suitable for the charge. And if there's a storm for 3 days?

5. METHANOL FUEL CELL
Methanol fuel cells have good advantages – they work quietly and economically enough. They can be located inside the yacht and continue to work with any wind conditions and sea state. Exhaust – water and carbon dioxide. The power depends on the model, but the price will also rise. In general, it does not require special care while operating, but it sometimes fails, like everything in this world.
I had this fuel cell on my 579 and charging current was 4.5-5 A for Efoy Comfort 140 type for not new equipment. With time power drops down and fuel cell needs full expensive service.

6. HYDROGEN FUEL CELLS
Finally, the hydrogen fuel cell! It is a relatively new, progressive energy source that runs on renewable fuel. And of particular interest is that, in principle, in the future, hydrogen can be generated even on board the yacht itself, increasing the autonomy. Among the advantages - they are lightweight and compact systems that provide a high charge current (the UP400 model gives 32 A). It works in extreme conditions, is quiet and provides clean energy without emissions. Personally, I am not yet familiar with such a fuel cell, but I really looking forward to test it with first opportunity!